The demand for touchscreen technology continues to outstrip supply—this is a trend that shows no sign of waning as 2022 gets underway. Recent market statistics published by Counterpoint show that shipments of cell phones in the U.S. market have grown 27% despite shortages in raw materials including silicon chips which are key components for their production.

As such, manufacturers face mounting pressure to ensure that the layer stacks are uniform. This makes reducing any production deficiencies key to both the ability to meet market demand and satisfaction. An important development to support this goal is the use of white light interferometry to perform highly accurate non-contact thickness measurements.

The most commonly used type of imaging display is the liquid‐crystal display or LCD. The light from a backlight source is distributed throughout the screen by a layer of a diffuser (a light guide with a brightness enhancement film). The light then passes the first polarizer and travels through a layer containing liquid crystals sandwiched between two layers of electrodes. The liquid crystals are activated by the electric signal. In the case of the active matrix display, the bottom electrode layer consists of an array of thin‐film‐transistors located on a substrate.

Similar to imaging displays, there are a variety of touchscreen technologies on the market. The most common touchscreen technology is capacitive, which is based on detecting the change in the capacitance between two arrays of electrodes when the human finger approaches the surface of the screen.

The different components of these displays and touchscreens must be consolidated into one unit. This is done by manufacturers using a layer of adhesive, the uniformity of which can be difficult to control during the production process.

The Role of Low‐Coherence Interferometry 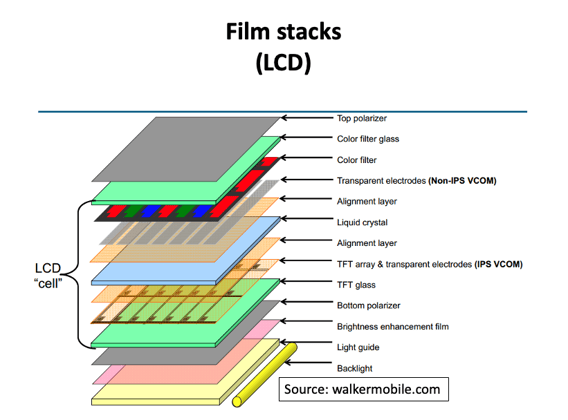 Optical non-destructive measurement addresses this issue by allowing 100% inspection, on‐ or at‐line, in real-time. This is the ideal application of low‐coherence interferometry. The light from a low‐coherence light source is split into two portions. These two portions form sample and reference interferometric arms. The sample portion of the light illuminates the layer stack of a touchscreen or some other device. Each surface within the layer stack reflects the incident light. The reflected light is then combined with the reference portion of the light. The combined light creates an interferometric pattern.

Using this non-contact measurement technology, the layer thicknesses in the touchscreens can be measured within a continuous scan, instead of at a single point. To obtain thickness variation along with the scan, the screen (or the optical probe) is moved along the predetermined path, while the thickness of the layers is being continuously measured. This scan identifies significant inconsistencies in the manufacturing process that cannot be seen with a naked eye, and cannot be directly measured by any mechanical means.

Low‐coherence interferometry instruments provide a clear advantage over mechanical measurement methods as discussed above. Lumetrics’ commercially available OptiGauge II is based on time-domain interferometry and serves as a comprehensive, practical tool for non‐destructive product metrology and quality control during and after the manufacturing process which enables manufacturers of consumer electronics and their components to increase production, reduce waste, and ultimately, meet the demand to maximize their growth.

Need help maximizing your production output? Talk to an engineer to see how interferometry can work for you.