We’ve built an outstanding line of metrology systems for a wide range of industries. At the same time, we understand that some customers have such unique manufacturing processes and user interfaces that only a customized system will be effective. If you need a highly specific solution to suit your manufacturing process, we’ll begin with a standard measurement system, then refine or completely reshape it to meet your precise needs.

Our engineers will work directly with you to develop a system that integrates elegantly with your specific environment—from your production line to your user interface. For instance, we can:

Click here to view our Discovery Service data sheet for more information on how Lumetrics can help solve your complex metrology solutions. 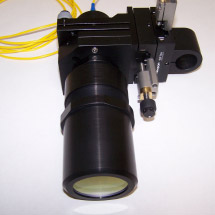 A customer approached Lumetrics with a desire to better understand the thickness profile during the molding process of manufacturing a plastic bottle. Due to cycling mechanical machinery within a 24-inch window around the pre-form, a standard probe (with standoff maximum of 2 inches) could not be used while the machine was running.

Lumetrics designed a custom probe with a standoff distance of over two feet that could be mounted to allow in-situ wall thickness measurement of molten paracin straw pre-formed plastic bottles just prior to the molding operation. The customer was able to obtain thickness data at discrete areas of the bottle and provide the needed thickness profile to generate their molding simulation. This allowed them to further understand the science behind their molding process and optimize their feed, pressure, and temperature profiles in their molding machine. 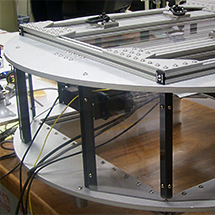 A customer came to Lumetrics with a request to design a scanning system that could measure a large three foot diameter glass flat while it was being polished. The customer wanted to be able to quickly and easily move the glass flat among a number of different polishing stations.

Lumetrics designed a system that could be moved around various polishing stations in the customer’s factory with a small crane. 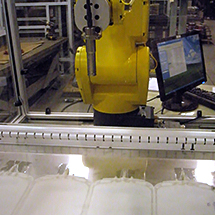 A customer came to Lumetrics with a request to design a scanning system that could measure a number of seams on blood bags during the manufacturing process. There would be four bags attached and the customer wanted measurements at multiple locations including the side seals and seals around the tubes going into the bags.

Lumetrics worked with a local robotics house and custom designed a stand-alone station that could accommodate 8 bags and provide automated measurement with only loading and unloading required by the machine operator. 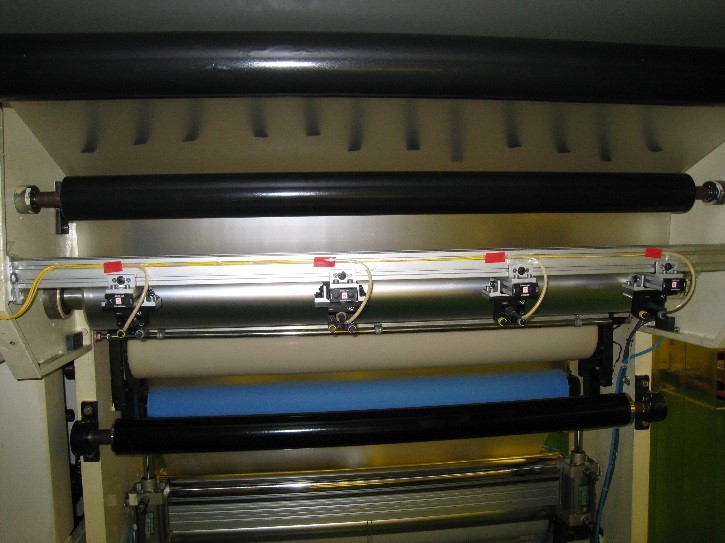 A customer approached Lumetrics with a request to understand and control their specialty film making process by measuring the thickness of the film at multiple locations along the production line. They also needed a custom user interface screen installed for their Korean plant.

The customer was applying an adhesive to a base film and wanted to understand the application and the drying process to produce film to tighter tolerances and with less scrap. Lumetrics reviewed the production line and process with the customer and decided on using our OptiGauge MLS with 8 fixed probes vs. a scanning system. Fixed probes gave them the simplicity they were looking for and also gave them flexibility if they needed to adjust the 8 probes in the installation. With the custom designed user interface screen their operators were able to easily control their process and improve the quality of their film. 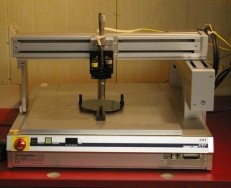 Customer had a need to measure voids in bonded silicon wafers. Detecting voids in bonded wafer pairs is critical for ensuring robust bonding processes and managing yield. Previous methods of measurement including IRISCN, IR transmission imaging, and scanning acoustic microscopy could not provide the accuracy, repeatability or speed that the OptiGauge provides.

Customer had a need for specialty scanner with high vibration resistance, extreme accuracy, and high repeatability. A surface profile was required but the customer did not want to provide an expensive reference surface for every different sample to be tested.

Lumetrics partnered with ASE Optics to design a specialty scanner with a built in reference piece in the table. The table provided solid measurements with no vibration. The table used a specially designed X/Y scanning system with probe. The reference piece can be easily positioned and allows easy access for any test sample. Specialty software was written using OptiGauge Control Center Tool Kit. 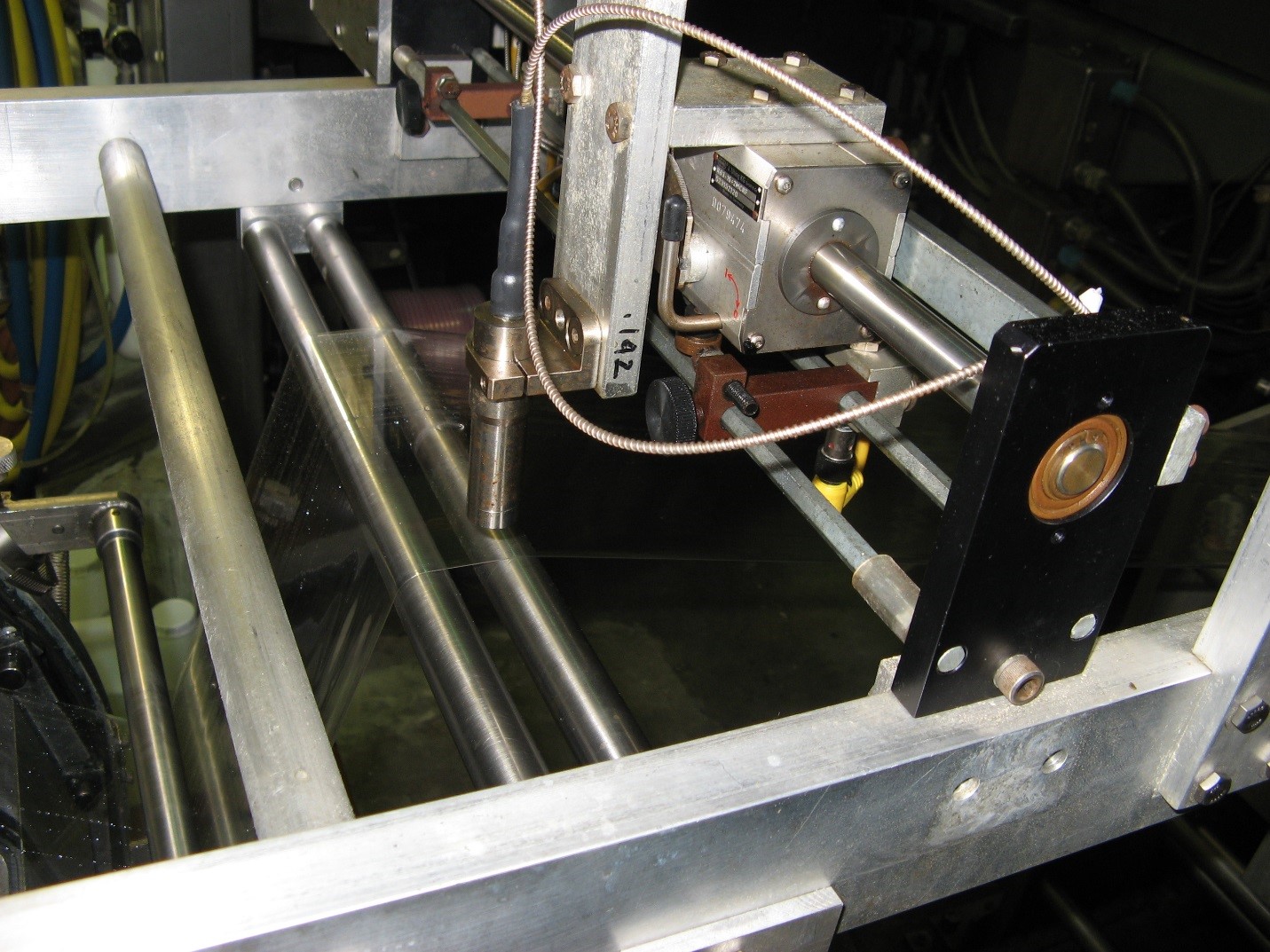 A major food packager asked Lumetrics to help reduce their costs for packaging of a meat product. Their packaging was a three layer film with the inner barrier layer being crucial to maintaining freshness. Prior to Lumetrics, because their measurement method was inaccurate, they would over engineer the middle layer by 20% or more. This middle layer was very expensive and the customer wanted to reduce material in that layer. By accurately measuring the film real-time Lumetrics gave the customer a tool to reduce the inner layer without compromising the meat product’s quality.

Lumetrics designed a scanning system that measured both a top and bottom film that formed the package. A scanning system gave the customer full cross web construction and allowed them to tighten their production specs, savings millions in the plants that they installed the systems. Each OptiGauge controller multiple production lines through the use of an optical switch and multiple probes. Specialized fixturing and scanners were provided because of the caustic wash-down materials used in the food production process. Specialized software was also provided for display to allow the operator to tightly control the production process. 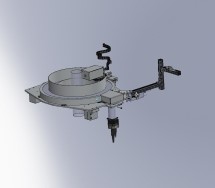 A manufacturer of film used for medical products was producing blown film and needed a method to measure, real-time, the thickness of the film. Issues had occurred that required continuous measurement of each roll of film, with reports that could be given to the end user of the film. The manufacturer had only been providing manual measurements of the very end of the roll.

Lumetrics designed a scanning system that rotated a probe 360° around the film as it was being extruded. Specialized software captured the data and displayed it real-time in a customized screen. Data was retained and then downloaded onto roll reports. A scanner and specialized fixturing were provided. To allow the operator to tightly control the production process, specialized software was written for online display using the OptiGauge Control Center Tool Kit.